What are the Miranda Rights?

The Miranda warning is a constitutional requirement in the United States given by police to detainees advising them of their right to remain silent, or their right to refuse to answer questions or provide information to law enforcement. This preserves the admissibility of the detainee’s statements made during interrogation in later criminal proceedings.

In other words, if a criminal suspect is asked a question, and they answer the question, that answer can be used against them in a court of law.

Every jurisdiction in the United States has its own regulation regarding what must be said to an arrested individual. Typically, the warning states the following:

The Miranda rights don’t need to be read in any order, and don’t need to precisely match the language of the Miranda case as long as they’re conveyed. The rights can be given orally or in writing.

Law enforcement officers are required to administer these rights to protect every detained individual from a violation of their Fifth Amendment rights against unreasonable self-incrimination. 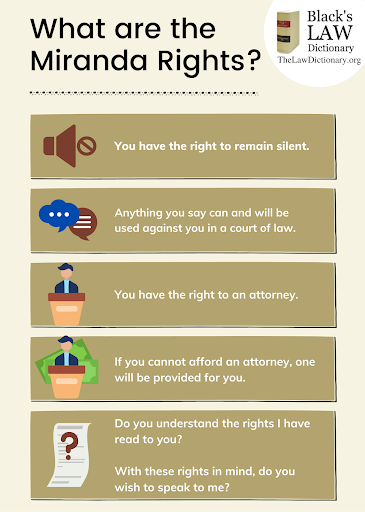 Why are they called “Miranda” rights?

In 1966, there was a landmark U.S. Supreme Court case called Miranda v. Arizona (384 U.S. 436) where the Court ruled that the Fifth Amendment to the United States Constitution restricts prosecutors from using an individual’s statements made during interrogation while in custody unless the individual was informed of the right to consult with an attorney before and during questioning, and also of the right against self-incrimination before questioning. The defendant must not only understand these rights, but also voluntarily waive them.

The case was brought to trial by an incident. On March 13, 1963, the Phoenix Police Department arrested Ernesto Mirando based on indirect evidence. This evidence linked him to a crime occuring 10 days prior where an eighteen-year-old woman was kidnapped and later raped. After two hours of interrogation, Miranda then signed a confession of crimes, including his typed statement, “I do hereby swear that I make this statement voluntarily and of my own free will, with no threats, coercion, or promises of immunity, and with full knowledge of my legal rights, understanding any statement I make may be used against me.”

However, at the time of the signing, Miranda wasn’t told of his right to counsel acquisition. Before the typed form was presented to Miranda, he wasn’t advised of his right to remain silent. And even more, he wasn’t informed that his confession could be used against him in a court of law.

At trial, prosecutors presented Miranda’s written confession as admissible evidence. His court-appointed attorney, Alvin Moore, objected to this because Miranda wasn’t made aware of his right to acquire counsel. Moore argued the confession wasn’t a voluntary one and must be excluded. Unfortunately for Miranda, the objection was overruled based on the confession and on other evidence.

Miranda was convicted of rape and kidnapping and sentenced to 20-30 years of imprisonment for each charge with concurrent sentences.

Miranda appealed to the United States Supreme Court with attorney John Paul Frank representing him. Gary K. Nelson, attorney, represented the state of Arizona. On June 13, 1966, the Court issued a 5-4 decision in Miranda’s favor. This overturned the conviction and remanded Miranda’s case back to Arizona for a retrial.

Miranda was retried in 1967 after his original case was thrown out. In this case, the prosecution introduced additional evidence, a witness named Twila Hoffman, Miranda’s former roommate. Hoffman testified that Miranda told her he committed the crimes. The Court sentenced Miranda to 20 to 30 years, but Miranda was paroled in 1972.


By: The Blacks Law Dictionary

We provide a full spectrum of custom software services, including web and mobile application development. Our offers cover all stages of the software development life cycle: from business analysis, design, and prototyping to the actual development, quality assurance, and post-project maintenance and support.